Bruuuuce.com celebrates its fifteenth anniversary last Wednesday, June 12. We posted here, for the first time as MP3 download, a chronology of Bruce Hornsby’s career… 100 downloads of his music.

The response has been phenomenal! I had tried to keep it low-key, but we’ve ended up on some prominent (and outstanding) websites, notably Jambase and OnTap. The good folks at the Atlanta News and Deadheadland also pointed several our way.

As a result, as of Tuesday morning, June 25 we’ve had 57,914 downloads. That’s over a quarter of a million downloads in the last two years alone! Thank you, as always,  for all of your support.

So, the hundred songs…

Over those fifteen years I’ve noted particular favourites of Bruce Hornsby’s performances, whether mine or those well received in the Bruuuce.com community..

I’ve produced a list of one hundred of Bruce’s finest and compiled them into this download for you, released over five days… solo performances, Range, Noisemakers, guest appearances, covers, songs made up on the spot… I would like to think that this is a worthy documentation of Bruce’s career to date.

I’ve restricted the choice to soundboards or decent tapings, so the quality should be of a high standard.

The end result will be one hundred songs, which will fit onto ten CDs. I’ve given a mini commentary on each below.

(A variation of this was published in FLAC format for the Daily Dose Day in 2011). I hope you enjoy them!

02. September 2 1986
The Bottom Line – New York, NY
The Way It Is variation
Early (mostly solo) variation on The Way It Is. I can hear Red Plains several times in there too.

03. April 18 1987
Daytona Beach Bandshell – Daytona, FL
The Way It Is
Bruce and the Range concerts featured regularly on the radio in the last 80s. Here’s a 12 minute plus version of The Way It Is that made it to air.

06. August 16 1987
Daytona Beach Bandshell – Daytona, FL
The Old Playground
An often overlooked “Scenes” song that I wish we heard more of today. The middle to end is a jam that the present-day Noisemakers would take to a ridiculous level.

07. September 24 1988
Madison Square Garden – New York, NY
Valley Road
It’s funny to compare this to countless modern day versions of this song (see #90) – this is as close to the original as you’ll hear, yet still far removed.

09. October 15 1990
Paradiso, Amsterdam, Netherlands
On the Western Skyline > Not Fade Away > Night on the Town

Jazz Cafe, London
The Weight
From Bruce’s last tour of Europe with a band, The Band’s classic, accompanied by North London’s inebriated finest leaning on the piano (I was one of them).

Pastures of Plenty
Hamburg, Germany
Voted by Bruuuce.com visitors as their favourite studio jam, it translates predictably well (although rarely) to a live setting. This jazz-infused version (and The Weight above) was from a tour of Bruce, Molo, JT Thomas and Jimmy Haslip (Yellowjackets).

18. March 31 1994
University of Miami – Miami, FL
Night on the Town
A dramatic orchestral version – too good to leave out, so I’ve included two from the same show!

19. July 23 1994
Promenade Park – Toledo, OH
Defenders of the Flag
Debbie Henry’s vocals give me the chills on this one.

21. August 29 1995
Melody Fair Theatre – North Tonawanda, NY
Iko Iko
This show is widely regarded as one of Bruce’s best. This was a New Orleans take on Iko Iko.

22. September 3 1995
FM Kirby Center – Wilkes-Barre, PA
Swing Street
I wish this song got more attention today! Molo’s intricate start to this song was always a highlight for the band!

23. October 27 1995
Manhattan Center – New York, NY
Cruise Control
Just a great show taped for TV. Look for the “Bruce Hornsby and Friends” DVD. They’re all having so much fun on this song, and Molo is a joy to behold!

24. October 27 1995
Manhattan Center – New York, NY
End of the Innocence
From the same show, this features Don Henley (This was the second take).

26. December 5 1995
The Melkweg, Amsterdam, Holland
Spider Fingers
Bruce was so happy with how the piano sounded at this solo show that he bought it.

27. December 8 1995
Brussels, Belgium
Imagine > Friends
Not the greatest quality sound but the music is beautiful. Surprise Elton cover at the end.

28. December 16 1995
Winterthur, Switzerland
You Can Close Your Eyes > I Will Walk With You
A James Taylor cover that I haven’t heard before or since, seamlessly into an “old” version of I Will Walk With You. (It’s been reworked more than once since).

29. April 4 1996
Wheeler Opera House – Aspen, CO
Country Doctor
Interesting to compare this one to more recent versions, where the horns would take the lead rather than Doug on guitar.

31. April 12 1996
The Fillmore – San Francisco, CA
Jack Straw
Had to be done at the Fillmore – especially when Bob Weir is in the house…

32. April 23 1996
Newport Music Hall – Columbus, OH
Terrapin Station > I Know You Rider
Bruce changes direction after a few bars of I Know You Rider into a gorgeous Terrapin referencing Jerry… and then back again.

34. May 6 1996
The Roxy – Atlanta, GA
Another Day > Uptight
Some improv lyrics after a minute or so, and a brief Stevie Wonder cover and Debbie Henry is right with him.

35. May 24 1996
Strand Theater – Providence, RI
Carry the Water
JV on bass, JT on keyboard takes turns excelling on this. Another than I wish were more prominent today.

36. June 5 1996
Community Arts Center – Williamsport, PA
Tangled Up in Blue
First time this song was covered by the band in six years.

41. July 29 1996
I Shall Be Released
Who can resist an old Bob Dylan cover? Not Bobby Read, apparently – fantastic.

42. August 15 1996
Factory Girl
An improved song – lyrics and all – stemming from a misheard song request.

44. October 9 1997
Salem Civic Center – Salem, VA
Look Out Any Window
The intro to this song always appealed to me – the orchestra version moved me a lot.

47. July 28 1998
The Strand – York, PA
Cassidy’s Cadillac
Little Cassidy is invited on stage, takes to the piano and steals the show.

48. August 22 1998
Sokol Blosser Winery – Dundee, OR
Spider Fingers > Disco medley
What Bruce and the band are all about inside 15 minutes. A seamless disco medley coming out of a throwaway comment from Bruce to introduce it. His closing comment says it all.

49. October 27 1998
Yoshi’s – Oakland, CA
Sugaree
A (largely) solo Sugaree which more than justifies a second inclusion for this song! Dave Ellis shows up late in the song.

51. October 27 1998
Yoshi’s – Oakland, CA
Sunlight Moon
Another from Spirit Trail. I think the quality of this recording is one of the best I’ve heard.

53. November 1 1998
Yoshi’s – Oakland, CA
The River Runs Low
I always thought this was a unique song live as it’s almost played straight, like the record.

54. November 6 1998
Yoshi’s – Oakland, CA
Loser
Michael Baker completely wings this on drums. I was just learning about the Grateful Dead in 1998 – this sold me.

55. November 7 1998
Yoshi’s – Oakland, CA
Sunflower Cat
One of the first performances of this song. Bruce had to remind them how it ended.

56. November 7 1998
Yoshi’s – Oakland, CA
Tango King
Doug Derryberry had just joined, and Kimock was sitting in. You can hear Bruce coaching him through the song as it was being played.

59. March 28 1999
Memorial Hall – Williamsburg, VA
Fields of Gray > Terrapin Station
Possibly my favourite version of this song… and into another gorgeous Terrapin.

60. March 30 1999
Memorial Hall – Williamsburg, VA
King of the Hill > Blackberry Blossom > Tempus Fugit
If anybody asks what two-handed independence is… play them this.

61. March 30 1999
Memorial Hall – Williamsburg, VA
Sad Moon
From another solo show, and maybe an even better example of the two hands together.

63. April 1 1999
Memorial Hall – Williamsburg, VA
I Can’t Make You Love Me
Bruce knows full well that he won’t hit the high notes in the original key, but tries it anyway. Will he make it…?

64. April 22 1999
Proctor’s Theater – Schenectady, NY
Stander on the Mountain
A very different version of this song I think, with Way It Is teases thrown in.

68. June 30 2002
Villa Montalvo – Saratoga, CA
Take Out the Trash
For a long time I’d call this my all-time favourite live performance of a song. The song is just so frivolous in nature, and JT proves why Bruce calls him “the best keyboard player in the band”.

70. September 24 2002
Keswick Theater – Glenside, PA
Place Under the Sun
When I first heard this song on Big Swing Face, I said that this was an extended jam intro waiting to happen. Thankfully, I was right. Featuring the late, great R.S.Hornsby.

71. September 28 2002
Landmark Theater – Syracuse, NY
Great Divide > Across the Great Divide
Extended solo piano intro into two divide songs(!). Listen to how quickly Doug is into the switch, and he clearly loves singing it.

72. October 5 2002
Haymaker Music Festival – Spotsylvania, VA
Cartoons and Candy
Bruce’s brother Bobby called this their best show in years. A lengthy twelve minute version, and another where Doug is clearly having a blast with the Prince-esque vocals.

74. September 19 2004
Handelsbeurs – Gent, Belgium
Halcyon Days
I followed this European solo tour around for a bit, and this song always seemed to get the best reaction.

75. September 19 2004
Handelsbeurs – Gent, Belgium
This Too Shall Pass
I prefer the solo version of this – such as this version from Belgium.

77. October 19 2004
Ridgefield Opera House – Ridgefield, CT
Mirror on the Wall
Since reworked as a much mellower song on the dulcimer, I love this version, and especially Bobby Read.

80. October 26 2004 (late show)
Blue Note – New York, NY
Sneaking Up On Boo Radley
This was long after soundboard taping had stopped, so I included a few from this as I think the quality is amazing.

84. November 20 2004
Great Divide > Sir Duke > 1999
I bugged Bruce for years to play Sir Duke, so I love that it made it onto several lists when he finally gave in. When people realised what the band were moving into from here (it took them a while!), they went crazy.

86. November 30 2004
Denver Palace of Fine Arts, Denver, CO
The Chill
This was the first song I heard from Big Swing Face, and always loved Kimock’s solo. Bobby take it on here.

87. December 9 2004
Murat Center – Indianapolis, IN
Circus on the Moon
My favourite version of this song was actually a cover by the Dave Rich Band! This is a cracking version towards the end of the ’04 tour.

89. February 19 2005
Paramount Theatre – Austin, TX
The Show Goes On
The song has really taken on a gospel feel in the last few years. This is as good an example as I could find.

94. July 20 2006
Mountain Winery – Saratoga, CA
The Good Life
Another for Bobby Read. He was red hot during this show (and tour, actually).

96. August 11 2006
Biltmore Estate – Asheville, NC
Sunflower Cat > King Harvest
The “King Harvest” appearances throughout this tour were a huge highlight for me – this was maybe my top version.

97. August 14 2008
Boarding House Park – Lowell, MA
Black Rats of London
The debut of “Black Rats”, from the Levitate record, which was yet to be released at this point.

99. September 26 2009
Town Hall – New York, NY
Prairie Dog Town
This was when the dulcimer starting coming out to play.

100. October 8 2009
Burlington, VT
Continents Drift
I spoke with Doug about his solo here, which was played by R.S. Hornsby on the record. Bruce had asked him to play it as close to the original as possible. 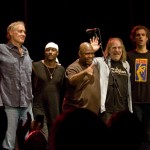 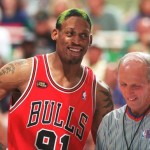 Looking back: What was happening in 1998?

The beauty queen and the wallflower, feel the same in their darkest hours.