Back in 2005, I marked this as a highlight of the year on this website:

“Bobby Read shone this summer – it was common to hear him solo four, five or six times a show.”

So many were equally moved through the years. Various correspondence from the shows includes:

“Tango King had everyone in the band taking spotlights, especially Bobby Read, who blew everybody away on sax.”

“Bobby Read had many memorable bits during the show, especially on Funhouse!”

“End of the Innocence was beautifully played and highlighted Bobby Read on the clarinet. I’ve said it before, but this guy is remarkable.”

“Bobby Read’s Electronic Wind Instrument solo on End of the Innocence was a near show-stopper.” 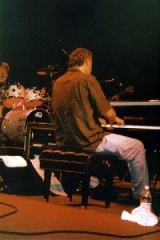 Show-stopper is right – I’ve seen Bobby’s solos encourage so many people out of their seats, and you can download some examples below.

As well as such a valued member of the Bruuuce community, Bobby is a solo artist in his own right (be sure to check Monkfish, recorded in just two days!), which is also a great example of Bobby using his talents to play with local musicians in Virginia.

A gifted producer, composer and arranger , Bobby runs Small World Audio from his home in Charlottesville, Virginia. You can read and hear much more at www.bobbyread.com.

A couple of years ago we put together one hundred of Bruce Hornsby’s best live tracks. Bobby is mentioned in the annotations beside several of them, and here are six of the best:

July 29 1996
I Shall Be Released
Who can resist an old Bob Dylan cover? Not Bobby Read, apparently – fantastic.

October 19 2004
Ridgefield Opera House – Ridgefield, CT
Mirror on the Wall
Since reworked as a much mellower song on the dulcimer, I love this version, and especially Bobby Read.

November 30 2004
Denver Palace of Fine Arts, Denver, CO
The Chill
This was the first song I heard from Big Swing Face, and always loved Kimock’s solo. Bobby take it on here.

July 20 2006
Mountain Winery – Saratoga, CA
The Good Life
Another for Bobby Read. He was red hot during this show (and tour, actually).
previous post

Good seed don’t grow on the barren ground, good things don’t come along, as you sit dreaming on.