Another collaboration, this time with Don Henley, gives us “End of the Innocence”, a timeless classic still synonymous with both artists thirty years later. The song made number 8 in the Billboard Top 100, received a Grammy nomination for best song and received the MTV award for best video of 1990. 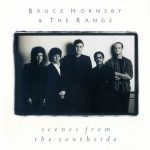 Scenes from the Southside release

The Way It Is release

The beauty queen and the wallflower, feel the same in their darkest hours.