“I’ve written loads of songs in the past but these days I prefer adding music to other people’s stuff which is why I like working in the studio so much. I actually wrote a couple songs recently but they were for a specific purpose, not to foist on the unwitting public.”

Music has been a constant thread through Doug Derryberry’s life. Born to a thoroughly musical family, Doug began piano lessons began at 5 and flute lessons began at 11. But things took a different shape when Doug started learning guitar at 13. Classical guitar and piano lessons continued through high school. At 15 he commandeered his father’s dusty old open reel tape deck and began to learn about overdubbing and songwriting and all the rest. Read more on Doug’s official site…

Doug Derryberry sat down with us in 2002, just prior to the release of Big Swing Face, Thanks a ton, Doug, for some entertaining and insightful answers.

I guess since “Spirit Trail” had more guitars on it than the previous two releases that he thought it might be time to get a guitarist back in the band. So upon meeting the Vertical guys, asked them if they had a recommendation and they recommended me and so about a week later Bruce called me and we chatted and he sent me the new record and then I went down to his studio and we played together for the afternoon and he hired me that day.

You’ve a lot of work besides – mixing for Dave Matthews, moe and Ben Folds amongst others – anybody else currently?
I just finished mixing a record for Last Train Home and also recently finished work on a new one for The Emptys. I’m just getting started on an album project with DC-area singer/songwriter Willy Catt.

Just how many bands are you in at the moment?! The Hey Devils, and the Emptys – could you tell us about those two, for instance?
Two really cool but very very different projects. I like how different they are from each other. At the core of each band is well crafted concise little pop songs, but then after that the bands are quite different. The Emptys are all about snazzy chords and arranged bits and unison riffs and everything is all orchestrated and harmonically very specific, though there’s wide open blowing sections too.

Then the heydevils intentionally keep the accompaniment harmonically vague or open and concentrate on driving crunchy rhythm with minimal fancy bits. We’re playing a bill together Fri March 29 @ Tobacco Road in NYC which is at 41st and 9th ave. This gig celebrates the release of the Emptys new CD, “Loveversesnothing”, which is available for sale at The Emptys Official Website. The heydevils have two independent CDs available for sale at their website (heydevils) and have another one that will be ready in August. Both bands also have a decent selection of free downloadable mp3s.

How often do you practice?
Not nearly often enough.

Do you play anything other than guitar (whatever your ability!?)
I’m a decent player of piano and of mandolin. I like playing bass. I mess around with pedal steel and banjo but I’m not very good.

Do you have any ambition to write?
I’ve written loads of songs in the past but these days I prefer adding music to other people’s stuff which is why I like working in the studio so much. I actually wrote a couple songs recently but they were for a specific purpose, not to foist on the unwitting public. 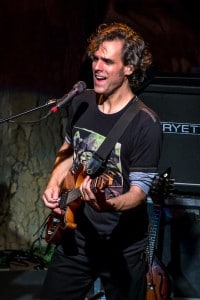 Do you have any anecdotes from touring or playing with Bruce? Any memorable mishaps or goofing around?
The silliest, and most fun memory that comes to mind was when we played a gig in the Cayman Islands and after the gig JT, (keys) Bobby, (sax) Bonny, (drums) Caldwell, (monitors) and me and a bunch of random other people ended up on the beach after the gig with a couple guitars and a couple coolers of beers. We sang and sang and sang all kinds of songs and spontaneously harmonizing and just laughing and having a great time.

The highlight, which had me splitting my sides I was laughing so hard, was when somebody played “Sunshine of your Love” and when it got to the guitar solo JT and Bobby and Caldwell were all air guitaring and singing the guitar solo faithfully note for note and at the top of their lungs. It was so loud it was just silly. But what a fun time.

Do you have a favorite song of Bruce’s to play live?
There’s so many great ones. On the ballad side, I love Fortunate Son and Tide Will Rise. I really love playing and singing the tunes off Hothouse and Spirit Trail.

Is there a standout gig that you remember, and if so, why so? JV mentioned that sometimes one of the band will get to “call” the set – is that something you get involved with?
We did that on the little mini-tour in April 2001. It was kind of neat to get to call the song, but really I think it’s best to leave it up to Bruce.

Any scoop you can give us on Bruce’s next record “Big Swing Face”? What’s your involvement on that?
I played on a couple tracks. I really enjoy the new record. It took a little time to get used to because sonically and thematically it is a major departure from anything he’s done before. The mixes are very tight and cool sounding. And there’s some really cool blowing sections. And then lyrically, it appears silly and light on the surface of it, but then the more i get in to it, the more I realize there are other levels to it and there’s some really sage notions in there about life and celebrity and pop culture.

What’s in your immediate future, Doug?
Well, the Hornsby show is about to kick back into high gear which I’m very much looking forward to, and then in August I’m mixing a record with c r a v i n’ d o g s and then …. who knows….

Thanks to Doug Derryberry for the interview and the insight!

I’m the perfect little foil of the prognosticators of doom.