J.V. Collier is one of the most sought after bass players of his generation. As a student of legendary Motown bassist James Jamerson, JV learned from the best. Now, after a career which has spanned more than thirty years, he continues to share his talents with some of the most recognizable artists in the music world.

“One of my favorites is Lost Soul. On my first tour with Bruce, my youngest brother was murdered and I could not leave the tour, so I asked Bruce to sing that song for me. And to this day that song brings tears to my eyes. There are so many”.

Born in Dixon, Tennessee, JV moved to the Motor City with his parents as a youngster. He first discovered his love for music at the young age of 10 when he began trombone lessons at his public elementary school. Two years later while listening to a Jimi Hendrix record, JV was inspired to try the bass. He decided to formally study the bass along with continuing his trombone lessons 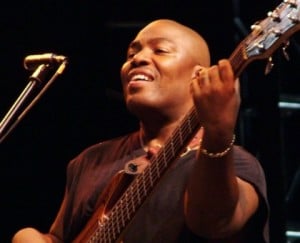 By junior high school, JV had become accomplished enough on the bass that he began working the local club scene. He attended Mackenzie High School, where in band class, he struck up a friendship with James Jamerson, Jr., son of the famed bassist. James, Sr. frequently visited the class and gave lessons to the young bass players after school.

In 1972, Motown Records moved to Los Angeles taking James Jamerson along and leaving a void in the city’s recording musicians pool. Sixteen year-old JV was offered the chance to record with some of the hottest R&B artists of the day – among them: The Temptations, Earl Klugh, Freda Payne, Ron Banks and the Dramatics, Enchantment, and the Floaters and producers such as Holland-Dozier-Holland, Paul Reiser and David Van der Pit.

Soon after, a young trio of sisters called the Emotions offered JV the chance to go on tour. Next came calls from across the country, which exposed JV to not just funk and R&B but jazz, disco and pop. New York recording sessions led to work with artists such as Frankie Valli, the Brecker Brothers and Kellie Patterson, as well as producers like Bob Gaudio.

I’d like to thank JV for making himself so readily available for this chat in 2002, and some of his world:

When and how did you meet Bruce?
I met Bruce at the Dallas Airport on my way to the first of two gigs in one night. I auditioned for John Molo and Bruce hired me on John’s word. So we met on the way to a gig. I had toured with a band called (Was Not Was), and the guitar player from that gig told John about me. I started playing full time with the band just before Woodstock. My first tour we opened for Bonnie Raitt.

You’ve done a lot of work besides – can you tell us who you’ve played with previously?
I have worked with Gladys Knight, Frankie Vali, The Temptations, Was Not Was, The Pointer Sisters, Ben E. King, and many more.

How often do you practice on bass?
I practice everyday at least three hours. I feel strange when I am not holding my bass. 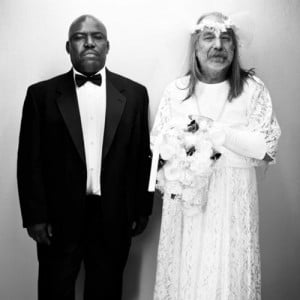 But you used to play trombone, right? Have you ever considered pulling that out on stage one day?!
I used to play trombone. Not anymore. I was ask to play it once on a recording session for Was Not Was, and I thought that I would pass out. It takes a lot of breath control to play that instrument, and I was not in shape to do it. Plus I sucked. We had to stop a number of times so that I could catch my breath, so the answer to the latter part of the question is NO!:-)

You don’t want to hear me play Trombone, trust me. I started playing bass at about 13 years old. I went to a Jr. High talent show, and all of the girls were screaming for the guitar players. So I figured that playing a guitar would be the easiest way to get a girlfriend. Of course that was not the case. But I did find my calling.

Do you have any ambition to write or mix?
No, all I ever wanted to do was play. I think that people that are able to write all of these great songs are blessed with a gift that allows them to see things that normal people don’t. I was not blessed with that gift. And that’s okay. I can’t dunk a basketball either. I am very happy with the things that I can do.

Forgive my ignorance – who or what is “Poppy Alexander” ?!
Poppy is a guy that Bruce went to school with. Somehow that name was transferred to me.

Who were your influences, and what inspired you about them?
I had a lot of influences. The first was Jimi Hendrix. I loved his passion, and his look. The second was James Jamerson. He was the bass player on most of the old Motown hits. I grew up in Detroit, and went to school with young James Jr., We played in band at school together. James Sr. would come to band class and hold court two to three times a week. He was incredible. a real genius. I have many more influences.

Do you have a favorite song of Bruce’s to play live?
I have lots of favorite songs. One of my favorites is Lost Soul. On my first tour with Bruce, my youngest brother was murdered and I could not leave the tour, so I ask Bruce to sing that song for me. And to this day that song brings tears to my eyes. There are so many. China Doll, Spider Fingers, Hot House, Mandolin Rain, Country Doctor. Stander on The Mountain, There are too many to mention.

Is there a standout gig that you remember, and if so, why?
You know, for me there are a lot of gigs that standout. There are gigs that are special because of the people that sit in. The PBS special that had Bonnie Raitt, Gregory Hines and Pat Matheny. The Woodstock ’94, There was gig in New York that a great jazz bassist Christian McBride sat in. And all of the shows we have done that everything seemed to go right. Over my six and one half years there have been a lot of great shows.

Completely unrelated to that (honest!) – what can you tell us about a purple afro you apparently wore on tour last summer?!
That all started when we did our first apperance on Regis and Kathy Lee. Bruce wanted a little pick up so he ask if I would wear an afro wig on the show. I said yes, and Bruce sent out for the wig. It worked well with Regis introducing me as his next co-host. So we would pick and choose when the wig would come out based on how we felt.

Well, my girlfriend hates it, so we make it a point to wear it whenever she comes to a show. We love it.

So how much of your music on stage is improvised, and how much do you decide beforehand what you’re going to do?
There is always the song first. And we try to stay true to the song. Then, we all follow Bruce. It is totally up to him as too how much we improvise. If the music is feeling magical there is no limit to where the song will and can go. If you look at the other musicians on stage we are all watching Bruce like hawks. We never know where he is going.

Do you guys ever think about a setlist beforehand, or say “We must include such-and-such tonight”?
The only song that we know for sure about is the first one. Usually Bruce will ask what we want to start with, and then we go from there. Bruce will usually try to feel the energy of the crowd, and that will dictate the direction of the night.

How much input do you have once you’re up there, or is it totally Bruce’s show?
Some nights Bruce will let one of the guys call a set. I am not comfortable doing that. It’s a hard job and I am very glad that I don’t have to do that much. One of the fun and different things about this band is, that this never feels like the Bruce show only. He wants all involved and that makes you come every night ready to play.

So what’s in your CD player right now?

Ihave a lot of different things going on in my cd player. Michael Ruff and Straight Jacket Live, Craig David, The Best Of Teddy Pendergrass, Marcus Miller M2, Gilberto Santo, Guaco. The last to are Salsa bands. I have been on this Latin Jazz trip for a while. These cats are killing it.

Away from the music, what do you get up to?
I play Basketball every morning, and then go to the gym. The last couple of weeks I have somehow fell in love with crossword and word find puzzles. I don’t know how that happened. But, B-Ball is my second love.

Any scoop you can give us on “Big Swing Face”? What’s your involvement there?
I played on a number of tracks, and I love this CD. Once again Bruce moves his music in a direction that will surprise you. It is still Bruce with some very clever writing. I think people will love it. I know that I do.

And what’s in your immediate future, JV?
I don’t know. I am still trying to figure out what to eat for lunch today. I have never been that person that plans out tomorrow, so I really don’t know what it holds. I just hope that I can continue to be blessed with the best job in the world. I hope to somehow bring a little joy into the lives of people that come to see us. All I want to do is Play Bass. I hope that is in my future for years to come.

Just when you think you’ve got it made, it’s all gone.