Bruce’s popular tribute band from Copenhagen now have a following of their own here on Bruuuce.com. We spoke to Claus Barfoed…

You’re in Denmark, how on earth did you come across Bruce?!
Well; in 1986 I fell in love with his first album. I was a jazz funk maniac. I heard Tower of Power, Al Jarreau, David Sanborn, Tom Scott, Dave Grusin, Spyro Gyra etc. then a girl said to me: Check this out! So I went home, put on the record and (as you can guess) “On the western skyline” came out through the loudspeakers. “hey where’s the funk-bass?!? But ok, let me hear some more.” Then came of course “Every little kiss”. What a sweet song, but I was not “sold” yet. Then came “Mandolin Rain” and………….WOW! I guess I’ve been a Hornsby fan ever since!

This is specifically a Bruce H tribute band, right? Who formed the band, and was it a deliberate decision to make it a Bruce H-based band?
It is absolutely a Bruce tribute band!! We only play Bruce’s music. Lars Visnjic Jakobsen and I made the band. We had been talking about it since 1995. I tried to brainwash Lars with Hornsby. Lars has always liked it, but in 1995 he really surrendered!! At that time we played with some other guys, and we played End of the Innocence and The Way It Is. It was a kind of rock music, a little Bryan Adams-like, so every time we should play the two Bruce tunes, Lars and I imagined that we were Molo and Hornsby. Like small boys playing… ha ha ha. In 2002 we started the band: “The Way It Is”. The other ones (!) in the band are not as much in love with Bruce, but we sense as time goes by a little more love for the music!

What sort of crowds do you play to?
We have only played 3 times on different kind of arrangements. Small gigs. Hopefully this will change in the future! The thing is, because we meet so relatively rarely, it takes some time to get 2 hours of music. Bruce’s music takes a little more time than just playing Mustang Sally or Leave Your Hat On!!!

Are there many Bruce H fans over there?
As we write in the cover: Everybody know “The way it is” nobody know Bruce Hornsby. It is a scandal!!! But with our band we intend to do something about it!

More of your music

How long have you guys been together?
For about one and a half years. But we are all involved in other bands and busy with jobs and family, children and so on so… months without practice!

Do you intend to pursue a career in music?
When I was young I had the dream. Now it is a great hobby!

Which of Bruce’s songs do you play?
Shadow Hand, The Way It Is, Road Not Taken, Preacher in the Ring, Across the River, Fields of Gray, Valley Road, Night on the Town, Sunflower Cat, Great Divide, Swan Song, White Wheeled Limo, Cruise Control, Look Out any Window, Down the Road Tonight and The River Runs Low.

Have you had any feedback from Bruce? Have you ever met him?
As a band it would be FANTASTIC to meet him. Personally I had the pleasure to meet Bruce in London 20th of October 2003 in the Jazz Café in Camden. We’ve just send Bruce a copy of the CD and we hope for a response. 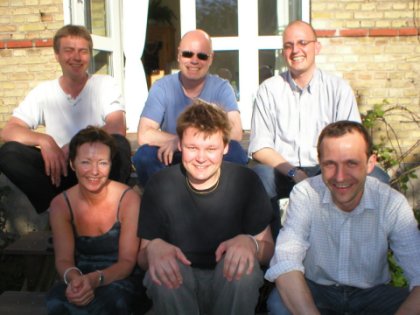 Till the Dreaming’s Done – the book

Some live life with eyes that don’t see
They look away at the time of your greatest need
Some talk, some’ll just do, some turn their back
Turn around and just walk away I know I’ve done that
Lonely days and lonely nights
Easy to be cynical never put yourself on the line
I’d like to reach out well why don’t I
Take the load up off your back I’d like to try