Thanks a lot to Paul Fuhr for contributing this interview that he conducted with Bruce last year. It didn’t make it to print as Paradigm Journal sadly folded, so Paul has very kindly shared it with us. You can also download the PDF version that was intended for publication.

An Interview with Bruce Hornsby

Showman. Genius. Virtuoso. By any name, Grammy Award-winner Bruce Hornsby has made a career of defying expectations at every turn and forging his own unique musical path. Hornsby’s body of work ranges from radio hits to acclaimed bluegrass albums, an off-Broadway musical to a full-fledged gig as a member of The Grateful Dead. Endlessly inventive, humorous and humble, Hornsby took time to speak with us about the release of his second live album Bride of the Noisemakers, his creative process, touring with Bela Fleck, and thirty years of looking down that old valley road… 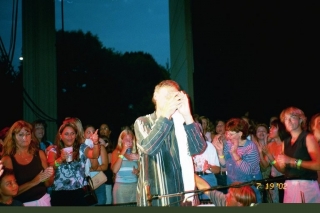 PAUL: Hey, Bruce. Thanks so much for doing this. Congrats on your new album, by the way. I picked up Bride of the Noisemakers the first day it came out.

<Laughs> Anyway, the tour’s going well. We’ve just done two shows with Bela [Fleck] and it’s a very natural pairing. Bela and I have been playing together for years. I’ve sat in with his band; he’s sat in with my band quite a few times. It’s a very easy hookup.

PAUL: Cool. We’ll be seeing you in a few weeks at your show in Columbus.

Well, good. You can see if we’re sucking for yourselves. <Laughs>

PAUL: Let’s start off with your musical SCKBSTD. How long have you been interested in writing musicals?

I got a letter out of the blue from Playwrights Horizons on 42nd Street. They’d heard three songs off my Halcyon Days record and they thought it sounded like show music, so they sort of commissioned me to do this.

So, I thought, “Hey, let’s give this a shot.” That was in 2005 and it’s years later. We ran one idea up the flagpole about a Civil War re-enactor which we thought was pretty funny: people dressing up and camping out.

We thought the whole scene was pretty interesting and amusing. Who knows? Maybe that will be my next gig. <Laughs> Anyway, we have some wind behind our sails and we’re in production in Norfolk, Virginia.

JEFF: How did SCKBSTD differ, approach-wise, than your albums? When you are going into the studio, are you doing a lot of demo work beforehand or are you seeing if things develop organically?

The process is not that much different: I write the songs, I demo them, and then I show them either to the band or, in this case, the producers of the play.

I just get feedback and go from there. It’s mostly about writing the song. It has to be something that is strong and interesting to me. If everyone thinks it sucks, then I don’t know what to do. Actually, the latest song I’ve written has gotten very mixed response. It’s a rather dissonant, sort of graduate-level piece of music.

Some of the less adventurous music listeners in our camp are going “Whoa.” <Laughs> “What’s this?” But that generally makes me think I’m onto something, if you know what I mean.

PAUL: Well, to that point, you once said “Playing a song straight is a real prison for [you].” Have you ever written a song as a foundation in the hopes of reverse- engineering it live and/or taking it somewhere different?

Well, that would be a really good approach, Paul. I wish the approach was that we’d write the song and play the song live a lot and then we recorded it. We did that once. It worked okay, way back in The Range days. For the record A Night on the Town, we played a few of those songs live first, but not that much.

The schedule had it that we weren’t able to do that so, that would be better for us because I’m a slow learner. After we record them and we start playing it live, that’s when we really learn how to play them. So, frankly, that’s one reason why we put out these live albums every once in a while, every ten years.

We get to the point where, in some cases, we kinda nailed it in the studio version but haven’t beaten it. In more cases than not, what a song eventually evolves into is way stronger to me.

A lot of it has to do, frankly, with the way I sing the song. Bride showcases that development where I write the song, I record the song, then I learn how to sing it–not just play it. That’s a really good reason to have Bride out there. It really shows the way I think songs should’ve sounded originally.

PAUL: I don’t think anyone’s ever asked you this: How did your appearance in the little-known Robin Williams black comedy World’s Greatest Dad happen?

Oh yeah, man. I was so happy to be part of that. It’s so funny. I got a call from my producer’s old friend, Bobcat Goldthwait. You guys know who he is? 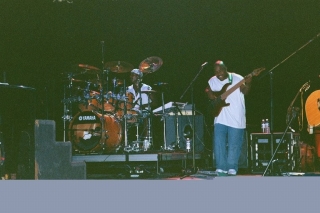 Well, as is the case with a lot of people in modern popular culture, what most people know about him is not what’s he about at all: some shrieking, screaming comic from the mid- 1980s. He’s actually not that guy at all. Bobcat’s a really good independent filmmaker.

So, he called my friend and said “We’re doing a film with Robin Williams. We need a musician for Robin to be a fan of and we’ve picked Bruce Hornsby. How do I get in touch with him?” <Laughs> He said, “Well, I just about talk to him every day. I’m doing his record right now.”

So, Bobcat and I talked. That’s how it came about. It’s a hilarious movie. Where else can you hear lines like: “Bruce Hornsby is a fag.”“But he’s got kids, Kyle! “Well, you have children, and you’re a fag.” <Laughs>

Quite an offbeat, but—to me—well- done movie. There’s a hilarious scene with these two Goth girls fighting over my Spirit Trail record in the halls of a high school.

JEFF: Bruce, I’d like to switch gears a bit. There’s always the one recurring theme you have in interviews: You can’t seem to escape the Grateful Dead. Is there ever a day you wake up when you say “If I get asked one more goddamned question about the Grateful Dead, I’m going to snap?”

<Laughs> No, man, I don’t have any problem with that at all. I loved my time with The Dead. I wouldn’t trade it for anything. I grew up as a Deadhead. My older brother was a Deadhead and attended a Deadhead fraternity at UVA where they used to drop acid, paint their faces, and go play intramural volleyball.

I mean we were even in a Dead cover band, so it must’ve been quite amazing for all the people who followed [Bruce’s band] “Bobby Hi-Test and the Octane Kids”, then cut twenty years later to Madison Square Garden, when I’m at a sold-out show in Madison Square Garden, winging it with no rehearsal with The Dead. No, I wouldn’t change it.

Now, I will say for many years—after ‘95 when [Jerry] Garcia died and The Dead stopped playing–it became a bit of an albatross around my neck because so many people would show up to our shows and scream for Dead songs.

Especially the song we did on the [tribute album] Deadicated, “Jack Straw.”That became a curse.

Obviously, that’s a drag when people expect you to be a cover band for someone else’s music. What’s to like about that? Nothing.

That’s sort of subsided, though. You still hear the odd “Jack Straw” request, but it’s not over half the people. They sounded so loud, it sounded like all the people. So, yes, there was a time.

And Garcia told me that if I started playing with them, a lot of Deadheads are going to come to my shows and start screaming for Dead songs. He said: “You have ‘The Curse,’ man. They’ll never leave.” <Laughs>

Well, they did leave but now maybe they’re coming back. But for the right reasons. Frankly, we prefer that audience to the older, lime-green pants and golf shirt crowd our old hits tend to bring. We’re not really a great vehicle for your stroll down Memory Lane. We prefer the people who are there to dance and have a great time. That’s the audience we want. Our aim is in more keeping with the Grateful Dead- ish audience than an older audience.

Wait, one more thing I’d like to add. So, no, Jeff – I don’t wake up every day and think that. <Laughs> I love the songs. There’s so many great songs. Hell, even Bride is bookended by songs written by [former Dead member] Robert Hunter.

JEFF: Thanks. From a personal experience, I managed to catch you at the Valley Forge Music Fair in ’93 and you did an extended “Scarlet Begonias.” Thanks for elaborating on that.

PAUL: You’ve been recording music 30 years … Where do you think the music industry is now? 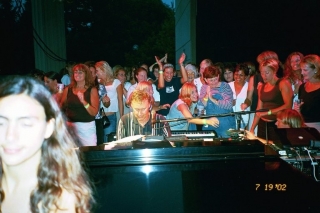 Well, it’s unrecognizable from where I started. When I got my music deal in ’86, you could actually make money selling records.

Obviously, you still can, but it’s much more difficult now and the record companies are dying by the year and the business is contracting by the year.

So, how do I feel about it? I wish it was the old way, where you could actually put out a record. I wish there were albums with album art. We used to like it when the art was big and we could put our buddies like Kenny Vance, from Woody Allen’s Crimes and Misdemeanors, then have us in the background playing a bar mitzvah. We liked it when people could be seen large and clear. So, hey, that’s regrettable, man. It just is.

PAUL: Well, now, you’ve moved from classically trained jazz, bluegrass with Ricky Skaggs, a musical, and a dozen studio albums. Is there a creative avenue you’d like to try out next, like maybe scoring a feature film?

Well, I scored a musical documentary for Spike Lee a couple years ago and that was fun. It wasn’t a feature film, but still. Spike and I are old friends. It was an easy score for me; I just enjoyed doing it. I’d welcome that possibility, but only if my situation was similar to that.

<Sighs> Not really, man. Mostly, these days, it’s modern classical music, which most people hate. <Laughs> There’s a little bit of that, even on Bride, and moving my songwriting into more harmonically complex songs.

For instance, that song I told you about that freaked everyone out. I’m moving in that direction. Less jazz. More modern-classic, simple traditional folk. I just want to jam, man.

PAUL: I know we’re out of time. Thanks so much for doing this, Bruce.

Sure thing. Thanks for being knowledgeable about my shit, guys. See you in a few weeks. 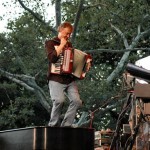 Your memories from 25 years of Bruce Hornsby 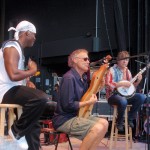 You don’t know what you got, till you lose it all again…