George Marinelli’s CD that he talks in this interview is now available at CDBaby, iTunes, Amazon MP3s and Google Music!

George Marinelli was a founder member of The Range, and is a long-time friend of Bruuuce.com. He has always been very generous with his time for us, and has contributed two tracks to different fundraising CDs over the years (see below). His new album, Wild Onions, comes out very soon – having heard a preview, it comes very highly recommended. We had a chat with George recently about his new record, his time with Bruce and other projects. Thanks to George for being such a great sport! 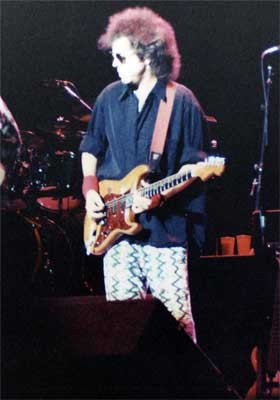 Your last album, you played every instrument and sang every vocal. Who’s on this one?

Si, that was true on the last album, Believe, that I put out in Spring of 2012. But as I was touring most of 2012 and 2013 with Bonnie Raitt, I didn’t have much time to write for this new album, Wild Onions. I cut 5 cover songs, which I’ve wanted to do for a long time anyway. One Beatles song, one Rolling Stones song, one by Clyde McPhatter, an R&B singer from the late 50s and early ’60s, and two by a writer and pal named Mark Cutler. I’ve always liked all five and thought it’d be fun to cut them. The remaining five are songs I wrote with my frequent and favorite co-writer, Rich Wayland. Ricky Fataar, drummer for Bonnie Raitt, and Hutch Hutchinson, bassist for Bonnie, play on two songs. The rest is all me.

And you’ve done the cover art again? And your website?!

Yes, I did do the cover. Not sure if I’d call it art but I take full responsibility 🙂 And yes, the woefully outdated website is also my doing. Need to bring it into the current century.

What challenges does that present, producing yourself? Do you find it easier being your own boss, or are you a harsh self-critic?

For the most part, I like working alone a lot. I love working with other musicians too, but the strange way I’ve been doing it lately has evolved into something very enjoyable for me. I don’t sit down and decide to make an album, then write ten songs for it. I just casually write and when the song is finished, I record it. Sometimes the recording actually begins during the writing process. And because I actually played drums as a kid before I picked up guitar, I think I have good ideas that I personally like and sometimes they’re pretty different than a drummer might play if I hired one to just sit down and learn a new song. I get to relax and take my time and compose each part I record. Same for bass and the other instruments. Hard to try so many things when there are people waiting and a clock running. But after all that, I end up working really fast as I don’t have to communicate with anyone else. I get an idea, try it, and minutes later I know whether I like it or not. Don’t need to run it by anyone. I know what I do and how to get what I’m looking for. And the biggest compliment that I often get is that it sounds like a band playing. I’m sometimes pretty critical of my voice, as I’m not really a singer. But I’ve found how to write to my voice, and I’ve arranged these covers in such a way I feel good singing them.

And this record specifically, where and when did you write it? Over how long a period?

Well, the 5 originals were mostly written before the tour started. I reworked some and made them suitable to fit with what I’m doing now. And the last song, ‘Good Night New York’ was written in November 2012, I think. So I’d come home on a break from the tour for a week or two, and cut a song here and there, or pull out an older one and redo some of the parts to make them more organic and fit with the rest.

How did you come to decide on “Wild Onions”?!

After moving to Nashville and mowing the lawn for the first few times, there’d be this really neat fragrance. Finally someone told me that there are wild onions growing and I was mowing them. They’re exactly like the green onions that you buy at a store. I’ve tried eating them and they’re safe:) So I always thought it was a cool name and might use it for something down the road- a song, a band, or now in this case, an album.

You and Bruce Hornsby have a particular couple of traits in common – a pursuit of the uncommon chord, or unusual subject matter. Do you think that your time with the Range, even back then, influences your writing and playing style today?

Yeah and no. One of the reasons that Bruce and I hit it off musically is because we do both like chords other than just triads and ‘power chords’ that guitarists are fond of. Different chord patterns. Unique changes. So yes, I always try to pick up any positive influence for writing or arranging. Can’t work with anyone for that long without being influenced and hopefully influencing. When I first heard Bruce’s material, I was impressed with the fact that he was writing from a different point of view lyrically. He and his brother/co-writer John would look at things differently, not just writing the love song. So that definitely rubbed off.

I was watching some of the old Range videos from Bruce’s box set – they seem like a blast with a bunch of friends. Do you have any memories from those video shoots?

It was always fun. Still pals with everyone. I do remember the “Mandolin Rain” video very well because we were on locations on a farm in the mountains about LA. I was playing with the farmer’s dogs when one bit me on the nose. Perfect. Drew lots of blood and the collision cut my lip too. Had to drive 30 miles to a hospital for shots, etc. Asked the director to shoot my good side and after spending about 18 hours, I’m hardly in the video, and when I am seen, it’s the puffy side. Show biz!!!

Touring with Bonnie takes a lot of your time now – what’s coming next there?

Gonna be a slow 2014 as far as Bonnie’s band. A gig here and there in Springtime, and a couple of weeks of festivals in Summer. So I’m completely digging being back home, working in my studio, and hooking up with pals I haven’t seen in a bit. Playing some sessions around town and hopefully will be doing some ‘live’ playing here in Nashville.

And anything else that you’d like to plug? Other current projects, musical or otherwise?

Obviously I’d like to plug the new CD, Wild Onions, on my label, WingDing Records. Also producing another album for a band called Blues Side Up from Indiana in early March. Maybe play some gigs myself. We’ll see. Some stuff I can’t talk about now but if they happen, I’ll keep everyone posted.

We’d like to thank George Marinelli for sharing his time with us so freely, and can’t wait to hear his new record. Stay tuned for details on how to get it.

In the meantime, George can be found all over the place on the internet:

He’s also contributed greatly to our fundraising cover projects, including Salivate (where he recorded “Stranded on Easy Street”) and Shadow Hands, where he contributed a tremendous version of “The Red Plains”.

Thanks as always, George!