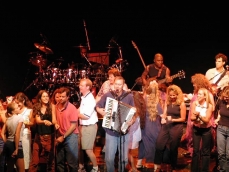 He’d just embarked on his post-Range phase, and retaining John Molo, took to Europe with Jimmy Haslip on bass and John “J.T.” Thomas on keyboards. It nearly didn’t happen – this was the first stop on tour. and a bird flew into their plane’s engine, badly delaying the start until past past 10pm.

They went straight from the airport to the stage, and played a three hour show. The BBC were there to record it, and the highlights were broadcast on Radio One a few weeks later.

Having endured a difficult first year away from home with Bruce’s first three cassettes for company, I’d built this night up as something huge in my mind, and set myself up to be let down. I did not leave disappointed.

Bruce remains a regular on the playlist of several presenters on BBC Radio. Fitting, since he broke in the UK with The Way It Is in 1986! Sir Terry Wogan can claim to have introduced Bruce to the public first.

Bruce to tour with Pat Metheny and Bob Weir

There’s a lost soul coming down the road, somewhere between two worlds, with an oar in his hands and a song on your lips, he’ll row the boat to the far shore, row the boat of the loved lost soul.