Bruce Hornsby spoke on Sirius XM with our friends at the Tales From the Golden Road this past Sunday (January 25). He focused, of course, on his involvement in the “Fare Thee Well” shows. We’d like to thank David Gans for his kind words about Bruuuce.com and references to our ever-popular Bruce Does the Dead series.

Here are some of the highlights of Bruce Hornsby on Sirius XM:

On his involvement with Fare Thee Well:

I instantly wanted to do it. It’s a deep thing, from a personal, historical perspective for me. In the 29 years since the release of my first record, I’ve been really fortunate to have received so many calls to collaborate with amazing musicians and artists. There are three that are the deepest and most enduring ones, and they cover a pretty broad spectrum stylistically. One is Spike Lee, then there’s Ricky Skaggs and of course the Grateful Dead, probably the most intense of these collaborative ventures, since ’87 when I first started opening for them. So for me to be able to culminate all these years creating mayhem with these guys, by being a part of these shows, it means so much. It means a great deal to me, so it was an instant yes for me.

On playing with them for the first time in a while:

It’s the first time since 2000, most intensely in ’98 when Phil was a part of the first Other Ones group. That was a very special tour, and then in 2000 Phil wasn’t a part of it – we had the great Alphonso Johnson subbing for him and it was a fine tour, but it wasn’t like ’98 for me. The Phil presence was missed, and I love Alphonso.  When we went through airports, we’d trade driver’s license pictures… I would show them Alphonso’s license and he would show them mine. Invariably, without one stop, we always got let through!

I don’t know if we’ve played much together but he’s a fantastic piano player. He could easily have the chair covered; I think they probably want me as much for the vocal end of it as the playing. Jeff will be playing organ and if I go to the accordion and do my Clifton Chenier imitation, maybe he’ll jump on the piano. I’m totally game for whatever happens. But Jeff’s a great musician and he’s been around the post-Grateful Dead world for many years now.

I’ll be very careful when I’m doing it, like I was in ’90-’92 with the Dead with Vince and I… you had to be very careful that it didn’t get too thick. Lots of times people would say to me, “Why do you sit there and not play so much?!” Well, because they’ve got it covered! Anything I add would tip the glass over and spill, so my antenna will be up for looking around and seeing if there’s anything I can add. If not, I’ll just sit there and enjoy it!

I’m really there to be supportive. I’m not there to be calling shots. But it’s in my nature to be a provocateur. They’re always open to that.

We both love the Grateful Dead songbook, but we try to express ourselves within that music, and not try to replicate. We’ve only played together once, at the Berkeley Greek Theater concert, we did Standing on the Moon. He’d never heard the song, and he did a fine job.

On his vocals at Fare Thee Well:

I’ve had no conversation about that. I’m just up for supporting whatever they want to do, like I always was back in the early 90s and the Furthur festivals. If they ask me to sing some songs, I’m totally game. I know a whole lot of them! There are probably ten that I feel very close to, and about thirty that I could do. It’s totally up to them, I’m just a guy trying to be supportive.

On his using own songs at the Grateful Dead/Fare Thee Well shows:

They played two of my songs before, and it was totally their call. I wasn’t there to play my music. I’m sure the answer is no, there won’t be any of my songs. I don’t think that’s why people are there; they aren’t coming to hear that. They’re coming to hear the great American Grateful Dead songbook, and that’s why I’m there too. We only played Stander on the Mountain twice, and then everybody forgot it! And then the same thing with Valley Road, which was played maybe seven times. That’s the one problem with only repeating a song once a week, or longer – if it’s a new song, it’s easily forgotten in those subsequent seven days!

On the ’98 Other Ones tour we did White-Wheeled Limousine. I came up with a new arrangement, which we still play to this day and came to be the seminal version. And then we played Rainbow’s Cadillac, also a different version which we still play.

On playing the Dead songs at his own shows:

Well I’ve not had a setlist for 25 years. My band were playing with the Cowboy Junkies at the Great Woods Amphitheater and Margo Timmins got sick, so they couldn’t do the gig. So I went out and said the Junkies couldn’t play, so for everyone who came to hear them, we’re just going to keep it loose and take requests from the audience. We had such a fantastic night and we just never looked back and never had a setlist after that.

Of course I get requests for Dead songs. There are people who only want to hear that, and I’m not here to be their stroll down memory lane… I’m not really that nice to people who want to stroll down my memory lane! I feel like what I owe the audience is what I’m most passionate about. I’m a lifelong student; I’m constantly developing what I do and broadening my horizons. I will placate the soft core to an extent, but I hope they recognize my version! The Grateful Dead songs that I tend to pull out would be Standing on the Moon, Wharf Rat, Lady with a Fan, Black Muddy River, Sugaree… every blue moon we’ll throw in Jack Straw, which always brings down the house. It’s like Every Picture Tells a Story meets the Dead, the way we play it. This year, I think we’ll play Jack Straw more on our Noisemakers shows. It’s a year for homage, and I’m all for it.

I have a solo piano tour around the country in April. My Solo Concerts came out on Vanguard in September. I played 80 different songs in my 12 concerts (last year), so it was a broad range – everything from Elliot Carter to Schoenberg to Webern and Messiaen and Ives and on and on, to old time traditional folk tunes and bluegrass tunes, and certainly some Dead.

On the songs he wished he’d played with the Dead:

I can say instantly, Ripple. It’s such a great song. I know I never played it with the Grateful Dead, not in those hundred or so songs I played in the early 90s.

I think it would be a great ideas if there was an acoustic moment in the show, so I’ll probably bring that up. If they don’t want to do it, it’s no big deal. But I think that would be something special. They did it years ago, and I always thought it was special. But Ripple is definitely one to play. I loved playing St Stephen with the Other Ones, such a transcendent piece – St Stephen into The Eleven is just so beautiful.

It’s a very free, associative thing – it truly is spontaneous in that way. My mind just wanders when I play. I try to play thematically but there’s always something being quoted.

This weekend I have a very special gig in Miami with the Michael Tilson Thomas New World Symphony. We’re playing a bunch of my twelve-tone pop. He’s a fan of the music that I’ve been writing in the past few years, which is fairly adventurous… it’s hardly three chords, or sometimes no chords. It’s movement and counter-point. I’m playing four of these pieces with the orchestra, scored by Bruce Coughlin, and my great drummer Sonny Emory will be there too. That’s two concerts on January 30/31 at the New World Center in Miami – Lincoln Road, South Beach.

On rehearsing with the Dead:

When I joined the Grateful Dead, I started winging it with them with no rehearsal at Madison Square Garden for five nights! And then we rehearsed for a European tour after that. We went out to Front Street and rehearsed for four or five days, and it was pretty loose. We’d sit around talking as much as playing, but it was always fun. Pretty mellow, pretty easy, and we’d just fall into a tune. Garcia would start a thing, and we’d all fall in.

I imagine it’ll be pretty organized. I think a group of maybe 60 songs will have been figured out, and then we’ll methodically go through them. Maybe we would work on the more complex pieces:  Help on the Way, Estimate Prophet, Weather Report Suite, Unbroken Chain… maybe try to wing a couple with no rehearsal. But I’m just guessing.

On the Other Ones:

When we got together, we meant it. We were really trying to put something strong together, and that’s the way it’s been ever since with all the subsequent bands. Phil and Bob are both very interested in making it strong and being proud of what they’re doing. And this will be no different.

On playing with the Dead for the first time:

There were two first times for me –  the first time I ever sat in with them, when I wasn’t playing with the band, was at Buckeye Lake in 1988, and I played accordion on Sugaree, sitting beside Garcia. He said, “We don’t let just anybody play accordion with us!”. I remember that like it was yesterday. It was such a special moment for me because I’d played in my older brothers Grateful Dead cover band, Bobby Hi-Test and the Octane Kids, playing frat parties with three layers of dancers: the regular dancers, the people dancing on tables and the people doing the dying cockroach on the floor. So it was in my blood. I was well-versed in their tradition of music.

Then when I started playing with them full-time, I came in off the street and started winging it with them with no rehearsal. But I knew maybe 30 or 40 Grateful Dead songs, which meant I didn’t know about 130. So I would make some charts and they’d help me out and do a little rehearsing at sound check, but it was pretty much just winging it. I’d done the work beforehand, just because I was interested. I was a fan and had played in groups that played the music, and so I knew the aesthetic and I felt very at home. When they go into Tennessee Jed, I’d go into my honky tonk piano routine – my Keith Godchaux bit, with a little Leon Russell or Professor Longhair thrown in, since those are two of my heroes. So it was not so hard to jump in with them, but still they’d thrown me some curveballs because that’s what’s supposed to happen. That’s the fun of it. And I would just try to hang on.

Tales from the Golden Road

Bruce Does the Dead 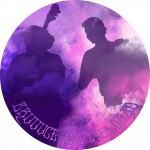 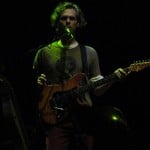 I’m the perfect little foil of the prognosticators of doom.